The Petzl Grillon is most commonly known as a work position device (EN 358). However, this versatile device meets several other standards that often get overlooked. One of the standards the Grillon meets is EN 795: 2012 type B, meaning it can be used as a temporary anchor such as an anchor strap configuration, or […] 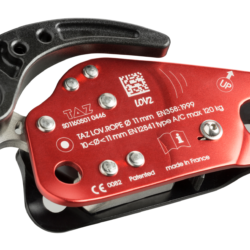 The TAZ LOV2 has a number of specialised characteristics that set it apart from other rope devices. For starters, it is both an EN rated descender and an EN rated fall arrest device. However, the real standout feature of the LOV2 is the unique ability to install the device on a loaded rope; this capability […]

In the vertical world, your ropes are literally your lifeline. It’s therefore critically important to know how best to care for your ropes, and how to tell when it’s time to retire them. Wash your rope Whether you’re in an industrial or wilderness setting, your ropes are going to get dirty. Dirt and other contaminants can drastically reduce the working life […]

Anchor testing and compliance: some things to consider… Installed fall protection anchors are a common feature in many workplaces today but many people don’t fully understand the requirements of ongoing anchor maintenance and compliance testing. Fall protection or work in suspension (rope access) anchors must meet a minimum 15kN (or ‘Kilonewton’, approximately 1,500kg) strength rating for single person […]

The Petzl Rig, Petzl I’D & Petzl I’D Evac are all very similar and function in much the same way. There are, however, important differences rope technicians and rescuers need to be aware of. The Rig The Rig came about as an industrial / rescue replacement for the venerable Gri Gri (a recreational climbing belay […]

It’s that time of year again! SAR’s annual technical equipment sale is happening on Friday 14th June from 10am-4pm. There’ll be fantastic prices on a huge selection of clearance items. We have great specials on 11mm static rope, from just $2.50 a metre. We’re clearing out loads of gear at or below cost, including Petzl […]

For those in the know, the SMC Vector has been an eagerly awaited addition to the SMC stable. Known and respected for their high quality gear, SMC have ensured that their new monopod reflects all of their experience and the know how of a range of experts. We’ve attached the SMC Product Bulletin if you’re […]

CMC has just launched a new look and feel for their brand. The change to their brand reflects both that their products are more diverse than what the word ‘rescue’ implies and that most people already refer to them as just CMC rather than CMC Rescue. The new branding includes a new website for their […]

Some CMC Rescue Sewn-Loop Prusiks and Bound-Loop Prusiks were labeled with the MBS figures reversed (kN transposed with Ibf – See Information Notice for detailed image). Although function is not affected, any incorrectly labeled products can be replaced upon request. We have contacted all of our customers who have been affected, but if you believe […]